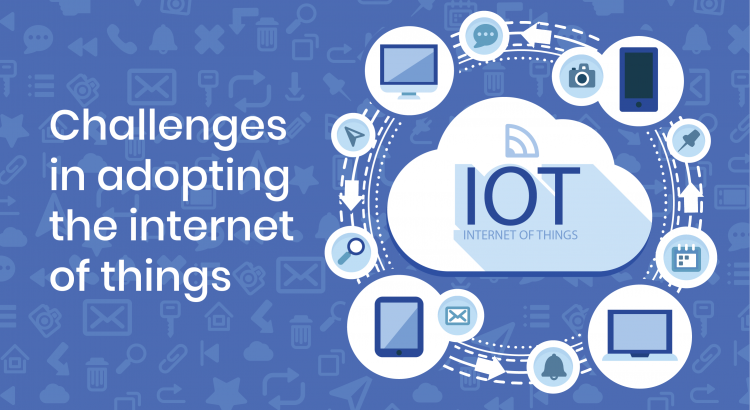 The arrival of IoT devices is a reality. We are no longer in an early adoption phase but more and more devices of this type are hitting the market. The IoT is already playing a fundamental role in the digital transformation processes of companies and the current benefits of this type of device will only increase in the coming years.

The IoT will add value to the consumer but can also be used to collect data in industrial operations, in cars, drones, or any other type of device. Ultimately, what the IoT promises is an increasingly connected world.

What is the degree of implementation of IoT devices?

As expected, the implementation of the IoT in different economic sectors is uneven. While there are some sectors such as smart cities for which it is essential to have devices that allow data to be collected, in other sectors their implementation is being later.

These industries that still resist the adoption of IoT are characterized by being sectors with a long history, with a defined mode of action and with a chain of command reluctant to change. 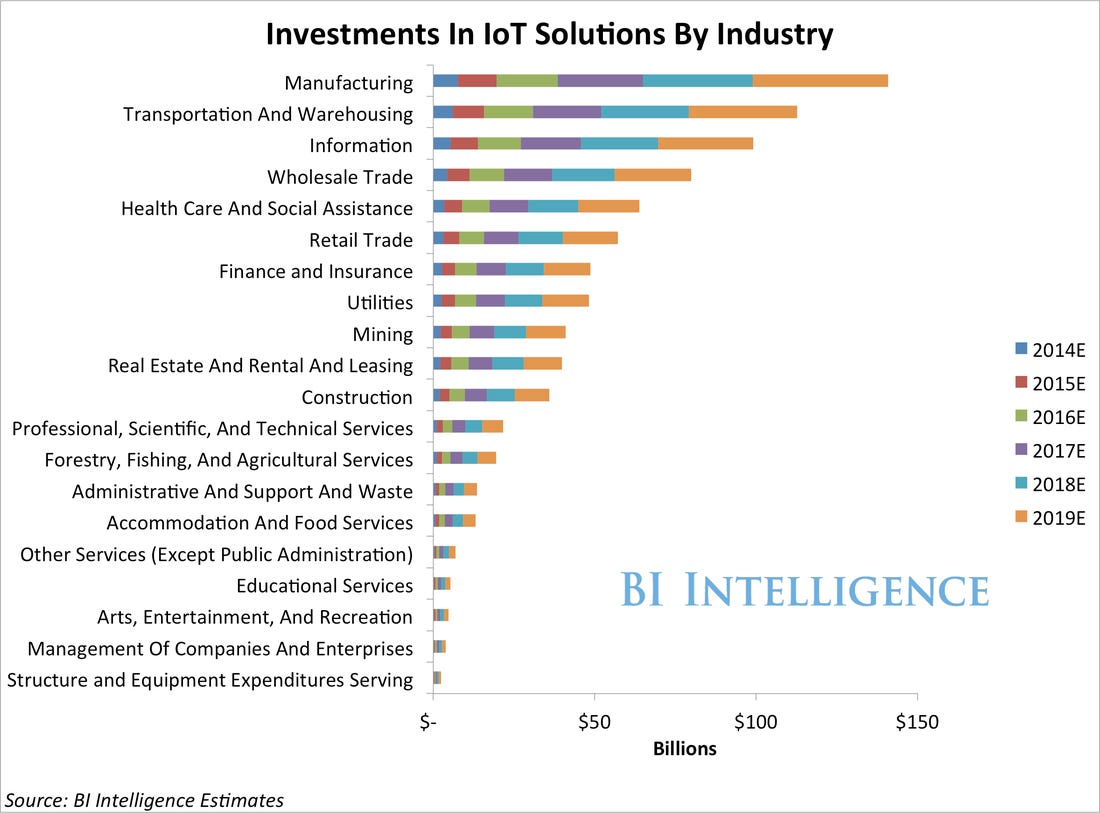 Recent estimates suggest that the number of IoT devices in the world will reach 36.130 million by 2021. Every month 328 million new devices are connected to the internet and it is expected that by 2022 each household may have 500 connected devices.

The IoT in the industry

Although almost all industrial sectors are investing or planning to invest in IoT, the degree of implementation varies by industry. In any case, thanks to the IoT by 2030 it is estimated that the application of technology to the industry will generate 14.2 trillion dollars, which translates into an increase in world GDP of 1.5%.

The industries and sectors that are betting the most on the IoT are, in this order, the financial sector, healthcare, telecommunications, industrial production, retail, in the energy sector, and transport.

The practical translation of the implementation of the IoT is not the same in all industries or in all companies. That said, IoT applications for vehicle-to-vehicle (V2V) and vehicle-to-infrastructure (V2I) solutions are growing the fastest, although the largest investments are in the manufacturing and transportation sectors. Both sectors will exceed $ 150 billion in investments by 2022.

In short, all this investment translates into 45% of Western companies developing joint applications of IoT, Artificial Intelligence, and analytical technologies.

What factors are important for the correct implementation of the IoT?

One of the technologies that promise to drive the growth of the IoT in a definitive way is the emergence of 5G. At this point, we will go from talking about IoT to Massive IoT since the density of connected devices will multiply by 100 (LTE-M supports 100,000 devices per km 2), while 5G will allow 1,000,000 devices per km 2.

On the other hand, the generalization of 5G will bring with it the creation of so-called platforms, which are the software that connects IoT ecosystems, managing the flow of data, managing devices, or exchanging data between applications.

Some of these platforms already exist, such as Orange Live Objects, which allows the end-to-end design of IoT solutions, being able to access the configuration and management of the device fleet, message decoding, rules engine and secure data storage. , incorporating open APIs for the exchange of information with business applications and providing materials and manuals so that the adoption and design of IoT solutions is much more accessible.

On the other hand, cybersecurity will acquire a very important role, being one of the biggest concerns of companies. Thus, global investment in cybersecurity applied to IoT has reached 1,325 million euros in 2018 and will exceed 2,700 million in 2021.

The challenge of cybersecurity

Cybersecurity is also one of the main barriers to the adoption of the IoT and the threats in this field range from hacking, taking control of devices, or infection with malware.

In this last case, there are already precedents. In June 2019, a malware known as Silex infected more than 2,000 IoT devices, erasing their firmware and rendering them unusable. Today there is no adequate preparation to counter these types of attacks.

Currently, the majority of companies (55%) believe that they could be the target of an attack in the next two years and only 10% trust that they have the necessary tools to detect an attack.

Another common concern is the possible remote modification of IoT devices or their functions. A recent example reported by Google is the modification of second-hand Nest cameras, which allowed their former owners to obtain images recorded by these devices without the consent or knowledge of their current owner.

In some cases, such as Medical IoT, hacking of devices can pose a high risk. Cynerio, an Israeli company, has created a solution based on the visibility of hospital telecommunications networks, allowing their managers to see suspicious activities. At the same time, the Cynerio software automatically detects which devices are vulnerable and which are not.

In summary, and to conclude with the issue of cybersecurity, it could be said that the problem stems from the use of outdated communication protocols such as Telnet or FTP.

According to recent statistics, 40.3% of households have more than 5 connected devices and 40.8% of these devices contain at least one vulnerability. These vulnerabilities are not related to the use of outdated communication protocols but also to the use of simple password authentication systems.

Other challenges for the implementation of the IoT

The cost of implementation is another problem that companies have to face. Considering that each IoT device costs between $ 10 and $ 50, excluding installation costs, it is estimated that the most ambitious IoT projects would require a budget of more than a million dollars. A project of such cost implies the approval of several layers of directors, who sometimes lack the technological experience to understand the importance of the IoT. 32% of manufacturing companies declare that the search for information is a significant barrier when implementing an IoT system.

Inexperience or lack of information about the benefits of IoT is sometimes combined with skepticism about the ROI they can provide. Given the transformative power of the IoT, which in some cases can completely transform a business model, some executives are reluctant to go for the IoT when the returns on investment are unclear. This problem is cited as very important by 34% of the managers of manufacturing companies.

Alternatives to ROI have been proposed as a measure of the success of an IoT project, given their special nature. Given that with the investment and implementation of the IoT, a single benefit is not generally sought, but rather a transformation that affects the brand, generates benefits, creates new business models and also reduces costs while monitoring them, it is suggested the adoption of a more holistic KPI.

For example, the adoption of Return on IoT Adoption (ROIA) is a very good option, since it is calculated by dividing the incremental value generated by the IoT minus its operational costs by the initial investment. This formula allows companies great flexibility when calculating possible returns since in many cases the benefits of the IoT are not entirely clear at the beginning of the project and can occur once the solution is installed.

The most important trends in IoT

Now that the deployment phase of IoT devices is more than settled, it is time to think about what to do with the data that these devices collect. As the volume of data will be enormous, it will be necessary to invest in technologies such as Artificial Intelligence and Machine Learning that will allow better management of said data.

Another strategy that will be assumed to manage the large volume of data is distributed process strategies: Edge Computing and Fog Computing.

Edge Computing is postulated not only as a way to manage a huge amount of data but, in conjunction with the Blockchain, it will increase the security of data transmissions.

Thus, 10 key trends for the future of IoT should be established:

While the transformative potential of the IoT for industries of all types cannot be doubted, there is still a long way to go in terms of the widespread adoption of the technology.

In the management layers, there is still a reluctance to a technology that promises to change everything without explicitly specifying what the benefits are on the investment. IoT projects have long-term goals and it is often difficult to fit that vision with the immediacy that companies require today. On the other hand, cybersecurity is the biggest technological problem that IoT projects face. The use of outdated communication protocols, insecure authentication tools, or the migration of hackers from computers to IoT poses a challenge that perhaps Blockchain, Cloud Computing, and Artificial Intelligence can solve.

This site uses Akismet to reduce spam. Learn how your comment data is processed.